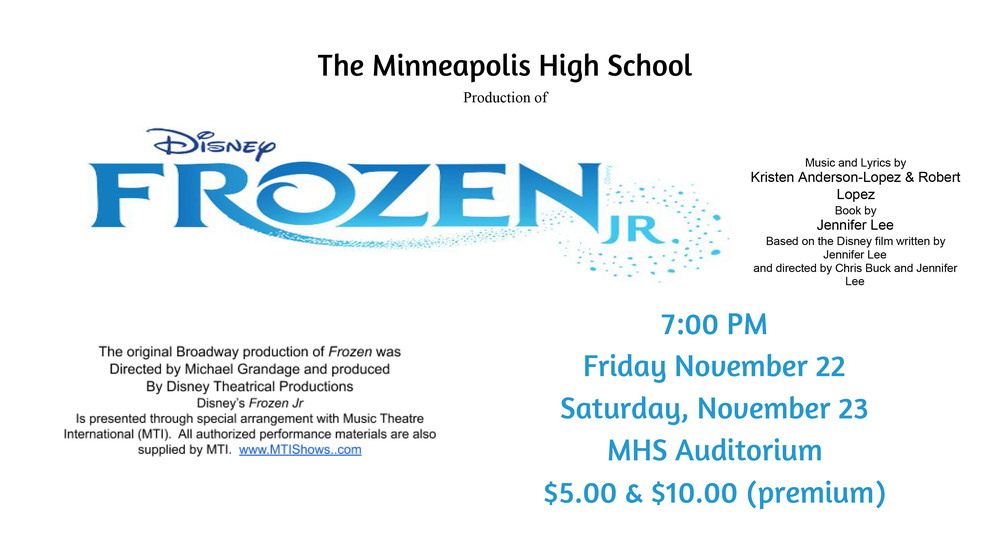 Minneapolis High School will present the production of Disney’s Frozen, Jr., at 7:00 PM in the MJSHS auditorium on Friday, November 22 and Saturday, November 23.  There will be plenty of seats available at the door, but tickets will be available beginning November 10 for $5.00 and $10 for premium tickets.

The music and lyrics for Disney’s Frozen, Jr. are by Kristen Anderson-Lopez & Robert Lopez, and the book is by Jennifer Lee.  The production will be based on the Disney film written by Jennifer Lee and directed by Chris Buck and Jennifer Lee

Frozen, Jr., the musical is only available in limited release for schools to perform.  It is currently playing on Broadway but has not been released for regional theatres. The leasing agency, MTI, gave high schools and middle schools the unique opportunity to produce this musical.  It includes all of the songs and dialogue from the movie plus a few surprise songs. It differs from the Broadway version in that it will be performed with piano and soundtrack rather than orchestration, and it is shorter.

The original Broadway production of Frozen was directed by Michael Grandage and produced by Disney Theatrical Productions.  Disney’s Frozen Jr. is presented through special arrangement with Music Theatre International (MTI).  All authorized performance materials are also supplied by MTI. www.MTIShows..com.

The cast and crew are listed in alphabetical order: